Expands to businesses of all industries, sizes and global regions

Mobile point of sale (POS) is changing at lightning speed.

Demand is moving upmarket. Technology, while more widely available, has also become more complex. Meanwhile, the sales and support infrastructures required to support the needs of midsize and large businesses continue to grow.

The stakes are high; there’s both tremendous opportunity and risk for all the players in the industry.

Mobile POS has evolved as an outgrowth of the traditional countertop payment terminal business.

When payment terminals with wireless capabilities and battery power came to market about 10 years ago, a high cost of ownership and a lack of network coverage limited their use. The terminals were expensive to acquire, maintain and replace. Plus, wireless coverage was inconsistent outside the downtown areas of major cities. As a result, the use and market for early wireless terminals was limited to high volume businesses in metropolitan locations. One example of early use would be a major railway transportation company accepting passenger payments aboard its trains.

The wireless payment terminals got some initial traction, but not the trajectory toward critical mass we see now.

Starting at the bottom

To provide ISOs and Acquirers in the market with a more universally available product with a more practical form factor, the founder of ROAM created a business using a specialized phone with a magnetic stripe reader. When you build a discreet hardware package, however, you run the risk that it may quickly become out of date. Back then, no one could imagine how rapidly smartphones and other technology would advance.

ROAM came up with a subsequent innovation – a more ubiquitous hardware package that included the industry’s first secure mobile card reader with an audio jack that attached to the phone. Adoption was initially slow; the technology was ahead of its time. Plus, while financial services raced very quickly to embrace ecommerce, that wasn’t the case with mcommerce at the outset.

Then Square came along, galvanizing the lowest tiers of the market and shaking up the players in the distribution channel. The traditional ISOs and Acquirers weren’t focused on servicing the lowest tiers of the market – the babysitters, lawn mowers, mom and pop shops and other very small businesses that weren’t previously considered true merchants. At the time, these merchants couldn’t typically justify the cost of a dedicated terminal or qualify for an underwritten merchant account.

With online enrollment and automatic approvals under an aggregated merchant account, Square became a marketing machine focused on this new tier of merchants. Quickly, other companies, including PayAnywhere (North American Bankcard) and GoPayment (Intuit) were also competing for market share.

Mobile commerce has followed the evolution of the payments industry. Both have come a long way, quickly.

Today’s mcommerce platforms include POS and payment terminal functionality. For example, integration with backend systems, including order management and accounting, is already starting to happen. In addition to the core payment applications, other value added applications are gaining popularity, such as gift card and loyalty programs; the evolution is similar to storefront and ecommerce businesses. Mcommerce platforms are being used for personal shopping, home delivery, curbside pick-up and a growing number of other use cases.

The traditional merchant categories doing substantial volume in the U.S at all tiers of business represent a tremendous growth opportunity for the mcommerce industry. But there are also some challenges.

As mcommerce moves upmarket, the level of integration and support needed increases. At the low end, e-mail support is questionably okay. But mid-tier businesses need everything packaged and integrated. The technology becomes more complex and so does the sales and support infrastructure. 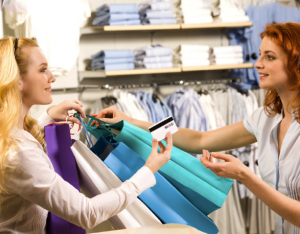 Presales engineers, technical support reps, integration troubleshooters and a variety of other experts are required. The bigger businesses are looking for solutions that include operations to support a higher commitment to uptime, version control, international support and many other specialized demands.

Regardless of the increased complexity of integration and the added operating costs, there’s a very good reason why mcommerce continues to move upmarket: mobile POS technology provides a strategic opportunity for businesses to stay ahead of their competitors. It’s likely to get easier and less expensive over time, too.

That’s good news for all tiers of the market.